AMD released the ATI Radeon HD 4770 graphics card. The release marks several milestones for the company, mainly winning the race for the first GPU to be built on the 40 nm process, and the introduction second-generation GDDR5 memory for the mainstream consumer segment.
The brains of this card is the 40 nm AMD RV740 GPU. Its specifications include 640 stream processors that churn out over 900 GFLOPs of shader compute power, 32 texture memory units, and 16 render back-ends. The GPU is aided by 512 MB of fast GDDR5 memory across a 128-bit wide interface. This provides the same amount of bandwidth as 256-bit GDDR3 commonly found in most graphics card in the range. The card is DirectX 10.1 compliant, and supports the ATI CrossFireX multi-GPU standard. 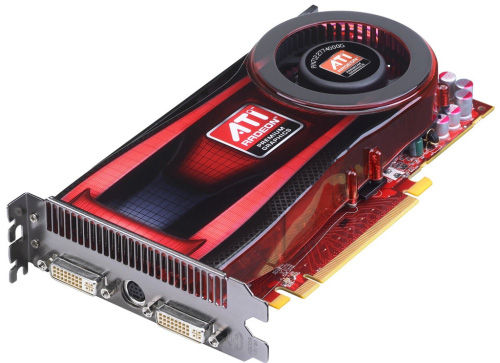