Corsair has announced two new series in its SSD lineup, the Nova and Reactor. The Nova will be available in 64 and 128GB capacities, while the Reactor series will be available in 60 and 120GB capacities.
The 2.5-inch Nova series is most likely based on the quite popular Indilinx Barefoot controller, uses MLC NAND chips and has 64MB of cache. The Nova series can reach read speeds of up to 215MB/s on both the V128 and V64, while writing speeds are 130MB/s for the V64 drive and 195MB/s for the bigger V128.
The Reactor series is a bit more serious as these drives have a 128MB cache and read/write speeds of up to 250/110 MB/s for the 60GB model and 250/170 MB/s for the 120GB model. In addition to the regular SATA 3.0Gbps interface, the Reactor series also features a mini USB as well. 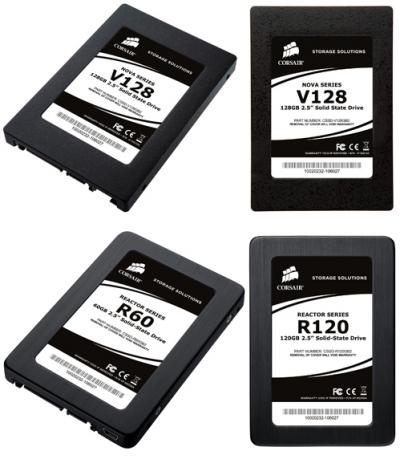