Gigabyte's first wave of motherboards based on the Intel P55 chipset, supporting the upcoming LGA-1156 processors, is set to consist of as many as nine models according to a company slide sourced by XFastest. Of these, there are seven ATX, and two micro-ATX motherboards, graded by features, and Gigabyte exclusives. The ATX lineup starts with a GA-P55 UD6 model, and proceeds down in the order UD5, UD4, UD3P, UD3R, UD3, and US3L. The micro-ATX series holds GA-P55M UD4 and UD2. 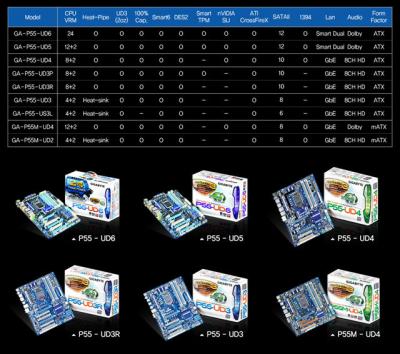