Intel is set to introduce a series of eight-core Xeon server processors later this month, that are capable of running in four-socket servers. With HyperThreading technology enabled, each core can handle two threads, taking the logical CPU count on such servers up to 64. Each Nehalem-EX chip has 8 CPU cores with dedicated L2 caches of 256 KB, a shared L3 cache of 24 MB, and Turbo Boost technology that helps conserve power while also stepping up performance when needed. The die also features a memory controller with four DDR3 memory channels. Being based on the Nehalem architecture, the chips are built on the 45 nm HKMG process.
In related news, Intel will also introduce Westmere-EP processors later this month. These chips will be based on the 32 nm Westmere architecture, and are likely to have 6 cores, up to 12 logical CPUs per chip, 12 MB of L3 cache and three DDR3 memory channels. These chips will be suited for two-socket servers and workstations. 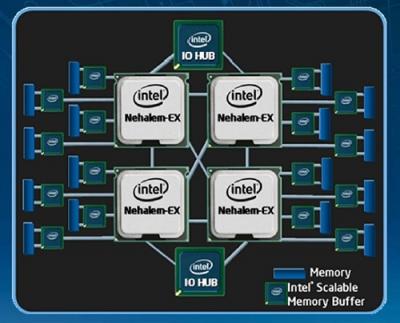