Kingston unveiled the first line of HyperX branded solid state drives (SSDs), starting with the HyperX MAX 3.0 external SSDs with USB 3.0 interface. HyperX is Kingston's brand of high-performance products, such as memory modules. The HyperX MAX 3.0 comes in three capacities: 64 GB, 128 GB, and 256 GB; and sports a sleek blue aluminum chassis in the distinct shade of blue found on HyperX memory module heatspreaders. Internally, it's a SATA 3 Gb/s SSD connected to a SATA to USB 3.0 bridge card.
The SSD is driven by Toshiba T6UG1XBG controller, which is connected to Toshiba-made MLC NAND flash chips, making use of some external DRAM cache. The SSD PCB is connected to the USB 3.0 bridge PCB, which is driven by Genesys Logic GL3310 USB 3.0 SATA bridge controller. The HyperX MAX 3.0 is rated by its makers to offer transfer speeds of 195 MB/s read and 160 MB/s write. The 64GB, 128GB and 256GB variants are priced at £125, £220, and £440, respectively. A review can be found at the source. 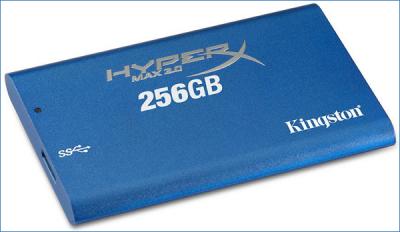