Western Digital (WD) is just about ready with its newest line of VelociRaptor high-performance hard drives. The second generation of VelociRaptor will take a shot at much expensive solid state drives on two fronts: transfer speeds and access times, at highly competitive price-per-gigabyte. With transfer speeds, the new VelociRaptor drives offer sustained read speeds of 145 MB/s, while having access times of 3 ms, as close as it gets to flash storage. These are conventional (Winchester) hard drives with spindle-speeds of 10,000 rpm, double the areal density as its previous generation and having an onboard cache of 32 MB, with the standard SATA 6 Gb/s interface.
The actual drives come in thick 2.5" form-factor, with a 3.5" bay mounting frame that also serves as a heatsink since it has aluminum ridges. The drives have a noise-output of up to 37 dBA. WD rates its MTBF at 1.4 million hours, and backs it with a five-year company warranty. The drives come in capacities of 150 GB, 300 GB, 450 GB, and 600 GB with prices expected to be highly competitive with SSDs in terms of price-per-gigabyte, given its performance level. 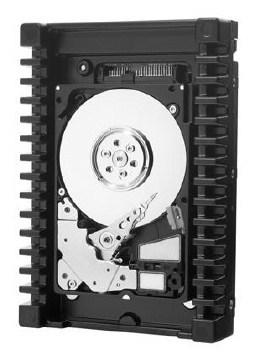