AMD's Radeon HD 5870 Eyefinity6 Edition, a special variant of the Radeon HD 5870, is slated for release on the 11th of March, according to a recent report. The Eyefinity6 Edition makes use of the six TMDS signal lines of Radeon HD 5870 to drive six display-heads. On the connectivity front, there are six mini-DisplayPort connectors. Using the included dongles, the card can connect to six displays with full-HD resolution, which can then be merged using the ATI Eyefinity technology to form one or more Eyefinity display-heads. The GPU and memory use reference clock speeds of 850/1200 MHz (core/memory), while there is 2 GB of GDDR5 memory on board. 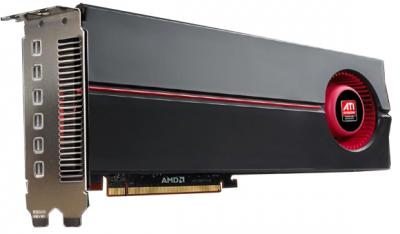